With the help of livestream technology, Orana Wildlife Park is breaking down borders, bringing you up close with their most beloved animals.

From anywhere in the world, and with the click of a mouse, animal lovers have undivided live access to five enclosures throughout the park.

This pilot program is the first of its kind in New Zealand, and second internationally.

The interactive nature of the web feed allows viewers to control the camera angle. And as well as virtually exploring these habitats, viewers can also join live Q&A sessions with animal experts.

It has all been made possible by a partnership with Canadian company BriziCam, and their Zoolife program.

But the program did not come without its challenges. Video streaming placed heavy demands on the park's network.

Still, there was little hesitation.

Orana’s Engagement and IT manager Toby Johnson said they leapt at this opportunity.

“One of the biggest advantages is expanding outside our Christchurch community, and bringing these animals far afield.”

In a statement, BriziCam said they aimed to build an immersive online zoo experience globally.

Spider monkeys were the first animals at Orana to reach all corners of the world, before being followed by gibbons, gorillas, rhinos, meerkats, and finally the kiwi breeding unit.

Toby said the meerkats were by far the most popular on Zoolife, but the recent arrival of the kiwi livestream is challenging this.

“They just do the strangest things. They’re jumping, hopping about, running so much faster than you could possibly imagine that ungainly little creature could do. It’s been an eye-opener for me and I’ve been here 17 years.”

Marketing manager Nathan Hawke said the entertainment factor of these livestreams was huge.

“We had some really cool footage of our youngest gorilla, sitting outside on a nice hot day, watching Ratatouille.”

However, conservation, connection, and education sit at the heart of the project.

As Toby explained, "it's not so much me engaging with the people but getting people to engage with addressing the problems that have led to these animals being endangered.”

The funds raised through the program go back into the park's breed to release and captive management projects.

Toby said it was vital people acknowledge the role they play in habitat destruction.

He believes the livestreams connect humans and nature back together.

“At a basic level, there is a disconnect with nature; and this is bringing nature back into our lives through media. It helps us to understand where we fit in the natural world.”

Yet this program has had additional unexpected benefits.

Toby highlighted how with countries across the globe still in lockdown, that human disconnect from nature continues to grow. These livestreams offer an apparent sense of normality.

“It gives them the opportunity to have a window to the outside world again.”

“Whilst Covid has been a terrible thing in some cases, we’ve also found it presented many opportunities and many silver linings.”

The Orana team hopes to expand the program in the future; but for now, Toby said its main focus was engaging with the community.

“The sky's the limit long-term.”

The livestreams are available via Zoolife on Twitch. 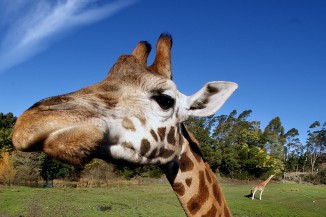