Sub fossil trees presented to the Waipuna (Halswell-Hornby-Riccarton) Community Board on August 4 tell a story of heritage narrative. However, they also present a number of restoration issues.

Craig Pauling, who was representing Te Tau Mutu Rūnanga when the trees were first discovered during a Fulton Hogan site visit in 2014, said he hoped research into the trees would give locals a greater appreciation of indigenous flora and fauna.

He said people could not believe there were once native birds like Kiwi in Halswell as late as the 1860s because of the current landscape.

Pauling said he noticed the trees because of their red colour, and suspected they were either Totara or Matai - and as it turned out they were Matai. When he found out that Fulton Hogan were planning to burn the trees he asked them to let him have the chance to do something with them, and research them. Those trees were then made part of landscaping projects in Christchurch.

Pauling said the bigger issue was around policy issues. Accidental Discovery Protocol only covered artefacts thought to be from before 1900, which didn't cover these trees as they were natural artefacts. Recording findings like this was not mandatory, which Pauling said he'd like to see changed.

The Waipuna board approved a grant of $1800 to the association in June 2020 to conduct radio carbon dating on the trees found this year, during another sub-division site visit in Halswell on Quaifes rd, to determine the year the sub fossil trees died when approached by the association.

Pauling said the trees found this year were still in their original position, unlike the ones in 2014.

Chairman of the association John Bennett said it was important to note the research was initiated from a mana whenua perspective, especially when it comes to future heritage discussions.

When Pauling had come to them they had acknowledged it would be a good basis for heritage discussions, David Hawke said.

Hawke said the reason they lasted so well was because they were buried so deep (0.8m below the ground), and seemed to suggest a flooding of the Waimakariri river which historically ran all the way to Lake Ellesmere.

"We've got history living beneath our feet,” he said. 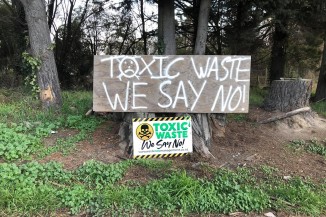 Board split on air quality issue