Tourette's syndrome can be extremely disabling, but it isn't a disability, according to the Government.

It is estimated that one in ten New Zealanders have Tourette's Syndrome, a genetic neurological condition that is characterised by both vocal and motor "tics" that range from mild to severe.

Because Tourette's isn't classified as a disability, it bars individuals from accessing essential services such as respite care and disability allowance.

Executive Director of the Tourette's Association, Robyn Twemlow, says she has confronted the Ministry of Health about this issue, but it's just not a top priority for Government at the moment.

"Hopefully it's just a matter of time before it becomes classified as a disability."

"Tourette's is a neurological disorder which sits within the umbrella term of neurodevelopmental conditions. The Ministry's Disability Support Services provides support for people with a significant sensory, physical and/or intellectual disability."

Atkinson said they had worked with the Tourette's Association to give support to individuals who meet the criteria.

The syndrome was thought of as a mental health condition until the 1980's, when it started to be recognised as a neurological disorder that an individual is born with, but New Zealand, being one of the last first world countries to recognise it as a disability, still has a long way to go. 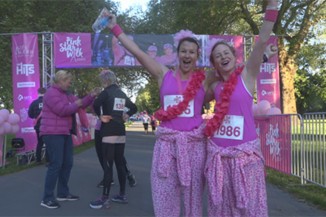 A walk for breast cancer awareness.