Jack Harwood and Liam Ryan have just returned from a whirlwind trip to Japan on a youth and disability exchange.

For almost two weeks, Jack and Liam, along with their caregivers and "Camp Mum", Tania McKenzie, got the chance to visit Christchurch's Sister City, Kurashiki, on a youth and disability exchange.

The trip offers the chance to visit a foreign country and explore a new culture, something that can be difficult to accomplish for families with disabled kids.

While promoting friendship between the two cities, the exchange also gives our Japanese counterparts a glimpse into Jack and Liam's lives.

The trip is funded by Independent Fisheries, which have been on board since the exchange first began, and make the whole experience possible. This year, the exchange took place between March 8 and March 21, and was the first time both delegates had visited Japan.

Tania has been a vital part of running the exchange smoothly.

"Sister Cities have, as their core purpose, the importance of people to people relationships. This exchange epitomises this philosophy. It brings together our youth with disabilities from Christchurch and Kurashiki and gives them the opportunity to travel and experience the culture of their Sister City."

During their time in Kurashiki, the group was accompanied by translator James Benson, an expat Kiwi, and Makoto Namba.

Both boys expressed that it was an experience they'd never forget, and they would stay in contact with the friends they had made.

Jack said he enjoyed the opportunity to try something new. "I now have an appreciation for the Japanese culture that I didn't have before."

Delegates from Kurashiki visit Christchurch every alternate year. Kurashiki is located in Okayama Prefecture, and has been Sister Cities with Christchurch since March 7, 1973.

Early next year, Kurashiki will send two of their citizens to Christchurch. 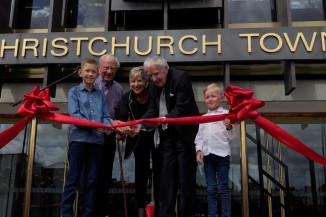 After eight long years, the people of Christchurch returned to celebrate.