The Linwood-Central-Heathcote community board has recommended proposed speed changes in both Woolston and Sumner.

Public submissions on the proposal were extensive.

"I do road patrol and we are constantly shocked and surprised by the number of cars that race along Ferry Rd as our children are crossing. It is frightening for both teachers and students and a slow-down zone would certainly make us feel safer."

Planning consultant and Sumner resident Marcus Langman, 42, supported the changes but feared the speed limit reductions would slow down the city.

He said the changes would result in a 20 percent drop in traffic efficiency.

"A social and commercial heart for Woolston can be reclaimed from noisy whizzing vehicles spewing out fumes," he said.

City Councillor Deon Swiggs said the speed restrictions in Woolston will work alongside the future changes involved in the Ferry Road masterplan to make the area feel like a destination and not just a through route.

Linwoood-Central-Heathcote community board member Darrell Latham raised concerns about whether the speed reductions will be effective.

"Unless the police are there to enforce it, I fear that many people will not drop their speed," he said.

"I think the fundamental thing is urban design of our roads, if we design the roads for slower traffic then people will be much more likely to go in and slow down," he said.

He highlighted central city speed reductions as proof that police enforcement is not an effective solution, as traffic on roads such as Montreal St average speeds greater than the CBD's blanket 30kmh speed limit.

Wakefield Ave in Sumner is excluded from the reduced speed area and will remain at 50kmh.

The Christchurch City Council will consider the recommendation before an eventual implementation of the speed limit reductions. 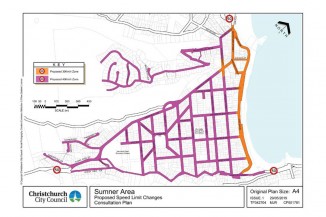 You will soon be able to have your say on a proposal to lower the speed limit through Sumner and Woolston villages.