A Rolleston mum says a new hi-tech playground in the town is damaging to children's brains.

The Selwyn District Council recently opened a "smart playground", which allows children to connect their smart phones to the equipment and play virtual games.

Rolleston parent Stephanie Pearce said the creators of the playground were a software company and it was designed to keep children on technology, not encourage imaginative outdoor play.

"They have made games where kids get small virtual animals at the park and then take them home to virtually care for them," Pearce said.

Pearce said many parents were put off by the playground and did not want their children using it.

The playground was advertised for children as young as three - Pearce said it was unhealthy for a small child’s brain.

"It is completely unnecessary for a child that young to use technology, and I would go as far to say it is damaging."

Selwyn councillor Jeff Bland said it was a fun interactive way for a child to include outdoor play with technology, especially in such a hi-tech world.

"Kids are going to grow up surrounded with technology whether we like it or not, and this is a fun but active way to use the technology at hand," Bland said.

He said that if parents do not like the playground then "simply don’t go to it".

The playground is on a 90-day trial and Selwyn district council will decide whether it stays or goes. 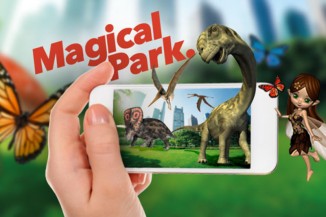 Aliens in the park