Civil disobedience worked for Martin Luther King and Gandhi - and now a group of Christchurch citizens are using the same tactics in a hope to convince the Government of the 'climate emergency'.

On February 1, members of Extinction Rebellion Otautahi staged a peaceful protest by composting ripped up pages of the Resource Management Act outside Christchurch's Commodore Hotel, where eleven mayors from the Canterbury region were meeting.

The group relies on symbolic non-violent protests to get their message out and they're hoping people power will inspire change.

Extinction Rebellion Otautahi was established in November 2018, just a month after the movement was first founded in Britain. There are now 15 groups set up across New Zealand.

Christchurch Mayor Lianne Dalziel spoke to the group at their recent protest and told them the council's target of zero emissions for Christchurch by 2050 may need to be reviewed.

Dalziel said the city needed to focus on lowering its carbon emissions in light of recent findings by the UN's Intergovernmental Panel on Climate Change. A special UN report published last year said carbon zero needed to be achieved by 2030 to avoid the worst effects of climate change.

Dalziel said the city's target "is the one we really need to focus on".

Thompson said it was encouraging and validating to speak with the Christchurch Mayor, but added Extinction Rebellion would become more disruptive if demands were not met.

The Christchurch group first announced itself last December by shutting off water to Environment Canterbury's main office, which led to five arrests.

"In movements throughout history, there's a point when a lot of people start getting arrested and that's when it shifts what is publicly seen to be acceptable," Brooks added.

The group offer a non-violent, direct-action training workshop for new members. One member told a crowd of roughly fifty at a recent public meeting: "People's willingness to go to jail and to sacrifice for the cause is what makes observers sympathetic."

The same member went onto talk to the crowd about why non-violent action works. He cited the historical success and societal impact achieved by famous figures, including the Freedom Riders and the Māori who defended Parihaka from government troops in 1881.

Members of local government in Canterbury have welcomed the group and their views.

"Good on you for making a statement and doing it in this way," Timaru Mayor Damon Odey told the group when he spoke with them at their recent protest.

Environment Canterbury (ECan) Chairman Steve Lowndes also said he was happy to meet with the group and had already contacted a member and invited them to his home.

"We've got to be open to groups challenging us and asking us [if] are we thinking about the next steps?'" he said. 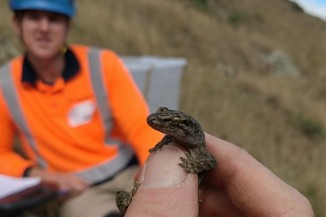 Gecko from the get-go for Lyttelton Port