Early hospital discharges, within hours of giving birth, and an increased demand for home births have been some of the impacts of the COVID-19 pandemic.

Kim, a second-time mum, had her baby by caesarean section the Thursday before New Zealand went into Level 4 lockdown, by which time her hospital already had a ‘one support person only’ policy in place.

She chose to go home two days after giving birth, due to lack of support in the post-natal ward as her husband was not allowed to stay with her.

Kim says overall the hospital did well under the circumstances - communication was good and she was kept well-informed.

Another second-time mum, Emily, had a home birth at the beginning of March, so her labour was not impacted by the pandemic.

Her post-natal care looked quite different, however, with Plunket conducting the baby’s check-ups by phone.

She was happy for this for herself but wonders if it would have been better for the calls to have been video chats as it’s easier to hide how you’re feeling when you can’t be seen.

Sarah’s second baby was due late April, but she changed her birthing plan to an elective c-section just after Easter due to the lack of family support available in lockdown.

Husband Mike was allowed in the theatre and recovery room but had to head home once Sarah and baby moved into the post-natal ward.

He says leaving was made easier because he had an older child to go home to and there had been no labour complications. He knew Sarah would be okay because the hospital staff were amazing.

Sarah says the only real issue she had was the DHBs seemed to have different standards, making it quite confusing and difficult to mentally prepare for labour.

Third time mum Kelly was induced the Friday before New Zealand moved out of Level 4 and headed home four hours after giving birth.

Kelly says the labour itself was never an issue, she was more stressed prior to lockdown, as she was concerned how her baby’s birth would look if the COVID-19 figures in New Zealand were high.

Post-birth has not been easy as Kelly is very family orientated and not being able to share the baby with her siblings and parents has been difficult.

According to a hospital midwife, it has been business as usual, the pandemic has stopped nothing.

“The women have always remained the centre of good care…that’s what midwives do…no drama, no fuss…they always put women first…” 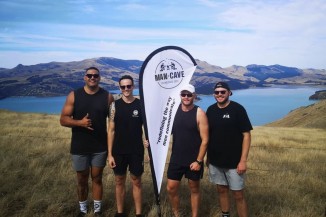 Two men, one challenge – all for mental health

A couple of Christchurch men took on a huge fitness challenge to raise funds for Man Cave.

let's talk about mental health and the importance of wellbeing