Al-Noor Mosque was more than a place for worship for three Christchurch friends. It functioned as a community centre and that’s where Huda Mohamed, Hajira Shiekh, and Hafsa Shire met.

All three of their families came to Christchurch from Somalia at different times, by different means, leading them all to the city, 13,553 km away from their homeland.

Christchurch. July 1. Around 400 people gathered at the Aldergate Centre. On Durham Street North to celebrate Somali independence. About 200 Somali people were there to celebrate 60 years of independence alongside members of the community

To begin what was to be a bright and festive evening, 21-year-old Hajira Sheikh gave an opening address. This was a big moment for her and time to acknowledge the history of her homeland.

Hajira Sheikh was born in 1999 at Christchurch Women's Hospital - the very same hospital her childhood friend Hafsa Shire was born at. The pair, plus their friend Huda attended classes at Al-Noor mosque together as they grew up in New Zealand.

Hajira’s grandmother and her nine children moved to New Zealand in 1998. Her journey to Christchurch took her family through the United Arab Emirates.

“Back then, the Emirates wasn't the tourist hub it is today and typically, success isn't common for people who don't have a solid education or financial support or even general wealth.”

New Zealand was seen as a more “hopeful” option for the family.

“You can imagine the culture shock; coming from hot sun and sand to greenery draped everywhere and crisp air, not to mention the copious amounts of Caucasians.”

Growing up in Christchurch, Hajira was pretty oblivious to the fact that she was part of a minority group.

“One time a white kid called me black in an attempt to hurt my feelings but I detected no lie there so it kinda went over my head.”

From then on, she started to realise what discrimination was. Encounters of this nature wouldn’t be the last time Hajira’s race affected her life.

Huda Mohamed already had a family member living in Christchurch and moved here via the family reunification programme. She moved to Christchurch in September 1998 after spending six weeks in Mangere Refugee Resettlement Centre her family.

Huda isn’t part of the organising committee for the Somali independence celebration but she also attended, sitting at the table up front with the best view of her childhood friends' hard work.

Huda’s kindergarten was part of a programme to teach refugee mothers English so that was her first encounter with other children in a classroom setting. It wasn’t until primary school that she entered, for the first time, a classroom with mostly Pakeha children.

The preconceived ideas people had about Huda growing up were quite ignorant but thankfully not negative.

“I would get comments saying ‘wow I didn’t know people like you could be funny or laugh like that’ - it showed me that they already had a judgment on how someone like me should act and I think media played a big role.”

Hafsa Shire was born in Christchurch New Zealand. Her parents moved to New Zealand in the early nineties, as young adults and got married here.

Hafsa Shire was also part of the committee that organised the Somali independence day event along with Hajira. Throughout Hajira’s opening address, Hafsa watched in the audience while wearing her matching traditional Somali fabric; Hido iyo dhaqan.

The difference between Hafsa and her classmates set in when she decided to wear the hijab.

She wasn't made to feel like a religious minority, although she did "feel different” in class.

Media has affected the way Hajira, Huda, and Hafsa navigate their way in this world.

“A Muslim female is typically observed as an oppressed woman, that has no concept of rights, and whose life is dictated by the men in it. Safe to say it is not the case.”

Hajira has felt constantly let down by the media for portraying people from refugee and/or immigrant backgrounds in the “wrong light”. So much so that she’s “given up” on it.

Fortunately, Hajira was living in Melbourne during the March 15 attacks last year.

“My heart felt heavy and helpless to see the people I grew up with, directly attacked for their beliefs. I genuinely feel threatened to be a Muslim in Christchurch, and feel as though last year gave a spotlight to racist individuals to feel more comfortable with their bigotry,” Hajira said.

Looking back at her younger years, Huda also felt like her religion and home country weren’t accurately represented in the media.

“For example 9/11, although that happened in the US it had its ripple effects worldwide," Huda said.

She couldn’t agree that things have changed all that much but does feel that social media is one of the few places she can find a positive narrative of Islam and Somali culture.

Hafsa’s disappointment in news media is, for the most part, rooted in how terrorist attacks are covered worldwide.

“It took for an attack to happen here for the media to humanise us."

Associate professor of media and communications at the University of Canterbury, Donald Matheson said there is longstanding research that shows refugees and migrants are often bundled together, without differentiating their very different experiences. Migrants are too often treated as a mass as well.

“When there’s a violent incident there’s a big risk that someone different from the dominant culture will find their actions “explained” by their ethnicity or skin colour,” Matheson said.

He agreed that there is a serious problem of prejudice among politicians and commentators. An example being AM Show host Duncan Garner, who “slammed” New Zealand director, Taika Waititi two years ago for saying New Zealand was “racist."

“The politicians, in particular, legitimise racism and news journalists need to think about how to report them very carefully as a result," Matheson said.

Although this happens a lot less than it used to in New Zealand journalism, there are still instances of racism and ignorance, he said.

“I think there is more sensitivity than there has ever been, particularly when considering reporting on people who are first-generation migrants from Muslim countries,” Matheson said.

The three friends shared some advice they had for journalists.

Hajira suggested giving a platform to speak for voices that aren't typically heard, especially when it comes to the matters of refugees and/or immigrants.

“Their stories are powerful and need to be voiced accordingly,” Hajira said.

Huda has a simple message to the news media.

“With that said, my message to present/future journalists is don’t create or run with one story as that does more harm than good but, rather look for other stories.”

Hafsa said that news media needs to stops portraying refugees as being burdens to the country in which they want to seek asylum.

One book sold every 30 seconds 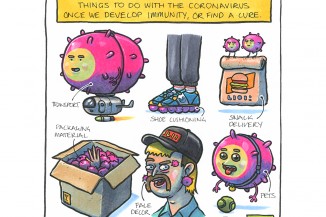