From the original milk bottle opener Milk Mate to the Nitrolingual spray pump, 75-year-old Pete Chapman has created it all

Arthritis New Zealand announced last week the creation and sale of Chapman’s latest invention, a Nitrolingual angina spray pump for people with arthritis in their hands.

The Nitrolingual spray widens blood vessels to assist blood flow and help the heart pump. It is used to treat or prevent chest pain attacks.

Arthritis NZ Philanthropy Manager, Dianne Armstrong, said prior to the pump's invention, squeezing the spray was impossible for arthritic hands due to the small button.

Armstrong said a small number of people with arthritis who used the medical spray raised their issues with the original pump, but were unsure where to start looking for a solution.

They took their problem to Douglas Pharmaceuticals, a long-time sponsor of Arthritis NZ.

"They were looking for a local solution,'' Armstrong said.

"We had discussed with them perhaps a conversation with Pete would be useful as he was already working with both parties on a solution to medico pack openers."

Armstrong said Chapman worked directly with Douglas Pharmaceuticals to create the easy-to-use pump and Arthritis NZ tested a number of samples with clients/members.

Nelson-based inventor Chapman said at times when people need the spray the most, the device needed to be easy to operate.

“The spray pump/applicator is made out of very strong plastic and because of the design, it acts like a spring. Once it is slipped into the top of the bottle, it becomes very easy for a person to use with either hand as it can be slipped in and out very easily.”

Chapman said he found it rewarding to help people by providing solutions to common everyday problems.

“Forty years ago I noticed my mother who had bad arthritis, and my young son who was 8 at the time: both couldn’t get the tops off milk bottles. I developed the Milk Mate, a small plastic device that lifted the tops off easily.”

Chapman said he later modified the device so it could take off the foil caps under the sauce bottle lids and similar items. He also invented a plug float which assisted in removing plugs as his wife struggled to remove the bath plug without bending forks.

Chapman, who was made to leave school at 15 because of dyslexia, said his photographic memory was what helped him create and invent three items for Arthritis NZ.

“I like to solve problems like this. I have dyslexia and I think outside of the box a bit more and can come up with solutions that others can’t.”

To order the arthritis-friendly Nitrolingual pump call 0800 663 463, email info@arthritis.org.nz or visit www.arthritis.org.nz/shop. All of the proceeds go to Arthritis NZ which supports people living with Arthritis in New Zealand. 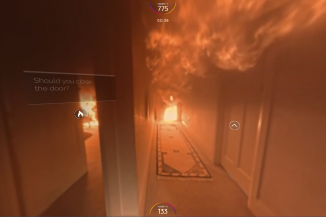 Would you survive your house fire?

A virtual simulation of how fast your home would burn down around you is now a reality.