The strike was put on hold today and tomorrow as a sign of good will to Christchurch exporters and for a chance for parties to mediate.

The port has reopened today but the port company says due to the last minute withdrawal of the notice there is not much activity planned.

Rail and Maritime Union Organiser John Kerr said the original withdrawal of the strike notice for two days was to demand LPC meet with them to negotiate.

But LPC asked them to hold off on the strike till Tuesday 20 March to give exporters a chance to recover and the union accepted.

He says negotiations start at 9:30 and are being mediated by the Ministry of Business and Innovation.

About 200 workers walked off the job at midnight on Tuesday for what was planned to be a 2 week strike.

Picketers gathered near the port and Christchurch City Holdings on Tuesday at midday.

Canterbury Employers Chamber of Commerce said depending on the length of the strike, Christchurch could be greatly affected.

Kerr said they know workers will suffer because of the strike and hope to reach a resolution soon.

"We don't want to be on strike, we'd rather be on the table negotiating."

Christchurch City Holdings (shareholder of LPC) said they think it would be inappropriate to intervene in the employment negotiations. 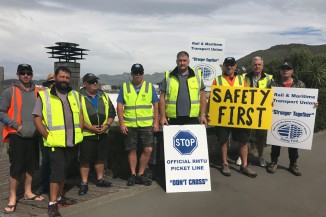 The Rail and Maritime Transport Union has forced the port to remain closed , demanding better wages and safer conditions.