Garry Knight is the manager of Penny Lane, a record store on Colombo St in Sydenham.

He said that although the Covid-19 lockdowns were tough for the business, they turned out to be a blessing in disguise.

The shop couldn't operate during alert level 4, but when it reopened there was an increase in demand, which has continued in the months since.

"It's definitely been busier for us," Knight said.

He said the success was partly due to current popular artists putting their music out on vinyl, which wasn't happening five years ago.

"A lot of hip hop artists and a lot of Kiwi bands; they're all doing vinyl."

He believed they liked physically owning music, and being able to post photos of their new records on social media.

Joel Dallow, 19, is a self-described music nerd. He liked the tangibility of owning records.

"[It's] all the intricacies. Taking it out of the sleeve, cleaning it, playing it... it's just so satisfying."

Dallow said buying vinyl was a more direct way of supporting the artists making the music.

This is in contrast to digital streaming, where artists can earn as little as $0.004 per stream.

Casper Thompson works at Ride on Super Sound, a record store on High St in the central city.

Thompson said he wants to provide a place for people in Christchurch to buy locally made records. 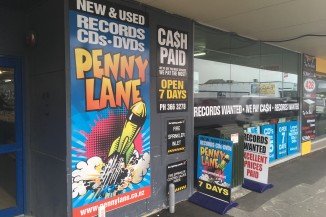 Vinyl is back in fashion, despite streaming being the go-to platform for modern day citizens to listen to their favourite music.