Author John Wilson's book has just been released. It highlights significant landmarks such as the Addington Jail and, arguably of equal importance, the milkshakes as the Stork Inn.

Author and historian John Wilson spent 14 years crafting and developing the story, which details the history of the Addington Jail and reveals the area as the burial place of Kate Shepherd, New Zealand's most well-known suffragette.

At last week's book launch, someone even got a bit nostalgic about the milkshakes at the Stork Inn, drawing fond laughter from the crowd of history buffs, Addington dwellers and old-timers.

"The most substantial part of the book is about the people and the community around them," he said. Addington was "very strong working-class community".

Wigram MP Megan Woods was thrilled to get her hands on a copy of the book.

"The book tells a modern-day story of a community with an absolute determination to get this book written," she said.

Other members of the community spoke of their delight in the book being launched. Paulette Robinson, who worked alongside Wilson on the book, joked that Addington now had a better history than Fendalton becasue of the book.

Special mention was made of former local MP and Deputy Prime Minister Jim Anderton, who passed away earlier this year. He had been looking forward to reading the book.

Hundreds of students from high schools around Christchurch gather to celebrate the Polynesian Festival. 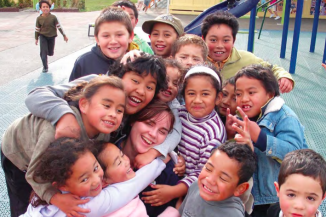 The journey to find their voices

One Canterbury foundation is helping children find their place in the world.