A flock of traffic controlling sheep have made a comeback in Canterbury.

First introduced back in 2014, the brightly coloured sheep were used as a form of traffic control due to road closures and damages in the aftermath of the Christchurch earthquakes.

They were incredibly popular with both locals and tourists, and became a symbol of the rebuild.

After becoming redundant as the streets were repaired, in 2018 they were auctioned off at the New Zealand Agricultural Show in Canterbury, where they raised nearly $10,000 dollars for the Mental Health Foundation.

Now, Christchurch's Enliven Places Programme have decided to bring four "legacy sheep" back onto the streets. Made from durable metal and currently located on High Street, these sheep definitely won't be moving to new pastures anytime soon.

The legacy sheep are an individual aspect of a number of projects Christchurch's Enliven Places Programme are working on, and other features around the city include lighting displays in the laneway between Hereford Street and Cathedral Square, murals on Press and Plymouth Lane, and on the side of the Ibis Hotel.

Rugby dives into the world of the sport and New Zealanders affinity with it. 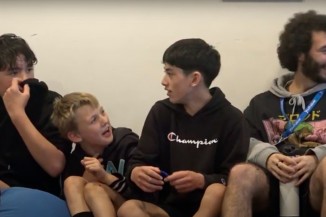 EACH WEEK, WE HIGHLIGHT ONE PERSON WHO IS COMMITTED TO POSITIVE CHANGE, AND SOMEONE WHO TRULY HAS A HEART OF GOLD.