University of Canterbury student, Nelson Pinder, says he no longer feels safe as a queer man in Christchurch, after he and a friend were verbally harassed by people driving past them last Friday.

Pinder said they were walking down Maidstone Road near the university, when one car full of people said something along the lines of, "up the a**," while driving past.

The second car came a few minutes later, honking and displaying general rowdiness towards the the two.

The following Sunday, Pinder posted to the university's student association noticeboard on Facebook and said the constant verbal abuse was changing the way he and others viewed the city.

"I never get upset at idiots shouting idiocy, it just adds up to a feeling of not being safe," said the post.

In an interview with Pinder, he said he didn't expect it would have happened in Ilam - a suburb with a strong student culture.

"At least some of them would have been students," he said.

Jen Shields, spokesperson for the rainbow support group QTopia, said public harassment was a problem experienced by a lot of queer people in Christchurch but the issue was improving.

They said the rainbow community challenged the biases and world views of many people and could be a reason they got a lot of verbal abuse.

"In cases where there's people that might present as outside the very stereotypical, heteronormative mould, we get seen as a threat," said Shields.

"They're encountering a bias they hold towards anyone that doesn't fit that standard, and they express that as harassment on the street."

Shields said some people were especially harmful when drinking and/or are around their friends.

Pinder said he expected the people that yelled at him on Friday had been drinking.

When asked about his reasoning for posting to the student page, Pinder said the main point was to raise awareness of the dangers still out there.

Pinder didn't have any issues with the support services at UC, but felt the rainbow community had become less connected since the COVID-19 pandemic.

He acknowledged the noticeable efforts UC had made to diversify the culture, but felt in some areas it was difficult to change.

"In engineering you can feel quite isolated being queer or a woman," Pinder said.

The university has a Student Code of Conduct that lays out the general rules for students, which they must sign before being accepted into the institution.

In the code it explains the students must respect one another, engage positively with the community, and not bring the university into disrepute.

UC rainbow advisor, Ari Nicholson, said the university had a responsibility to uphold the code on campus.

They said the code also applied off-campus, and students that breached it could face disciplinary charges, although they did not remember a time in recent history when such action was needed.

Pinder said events like Pink Shirt Day were a good initiative that helped show outsiders there was solidarity amongst their community.

He said he'd been considering going back home for some time and this recent event had been a 'kick up the ass'.

Pinder said he would likely leave and cross-credit to an Auckland University.

"They're encountering a bias they hold towards anyone that doesn't fit that standard, and they express that as harassment on the street."

The Cost of Love Episode 3

The Cost of Love discusses the sacrifices, attitudes as well as the emotional and material price we are willing to pay for our relationships 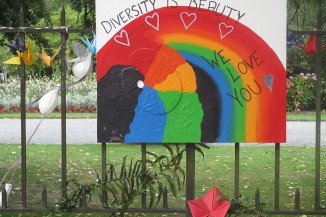 Renewed calls for a multicultural hub