A homeless pair in Latimer Square say their love for each other keeps their aspirations alive.

Michelle Hanson and partner Earl Roberts met by a lamp in Latimer Square, both living on the streets.

"I call her the lady of the lamp," Roberts said.

"She sat down by me and we started yakking, and here we are."

Roberts said he looked after Hanson, who has been diagnosed with schizophrenia and bi-polar disorder. He said she struggled with parts of daily life, and he enjoyed helping her out.

Hanson said she did not trust anyone else to be her caregiver. She felt the respite house she was previously living at did not always provide the care she needed.

Roberts said they "spend every waking hour together," and wanted a place where he could safely look after Hanson.

The couple had found help through Christchurch City Mission, a social services agency providing care in times of crisis.

Roberts said his situation was in part due to his illiteracy. He had been turned away from shelters because he could not complete the necessary forms.

Mulligan said the city mission provided advocacy in situations like that as it did not have a literacy programme. She hoped it would be able to provide one within the next few years.

Roberts and Hanson said the city mission was full of people with their heart in the right place. They were often "stunned" by the kindness shown to them by the public in Christchurch.

There was "heaps of aroha" in the city, Roberts said. 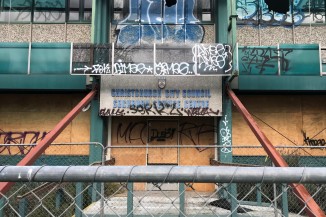 Homeless use 'unsafe' building as shelter

The conversation about homelessness is well overdue, says city missioner.