The Ministry of Business, Innovation and Employment (MBIE) has granted the Christchurch City Council $400,000 to deal with freedom campers.

This comes a month after the city council began consulting the Akaroa community over proposed bylaw changes, which would ban freedom campers from all but one area of the town.

In a city council-survey of 280 Akaroa residents, three-quarters agreed that current measures against freedom camper issues were ineffective. The maximum period of stay within the orange area in the map below is two nights within a 30-day period, while freedom camping is banned in the red areas.

Much of Akaroa's residential area falls within the two-night restriction, while the town centre and the majority of the waterfront is banned. All of the residential area is set to be banned under the proposed bylaw changes, meaning freedom campers will only be able to use the pre-existing area on Childrens Bay.

The $400,000 funding boost, as well as the proposed bylaw changes, will not necessarily have a negative effect on the town, according to Akaroa resident Alex Simpson, but he admitted that some businesses in Akaroa do rely on the campers for their business. "...They're not really solving any problems, they're just... trying to push the problem out of town," Simpson said on the proposed bylaw changes.

However, some in New Brighton are singing to a brighter tune. "It's been a big problem, so if we can find a proper solution for freedom camping, it would be great," said Deputy Chairperson of the Coastal-Bruwood community board Tim Sintes.

The New Brighton community will benefit from the installation of new toilets. The rest of Christchurch and Banks Peninsula will receive the relevant education, signage and compliance packages to assist with camping related issues, packages that will be necessary if Akaroa the bylaw is changed.

“Any bylaw changes would be publicly consulted on later this year so the changes can be in place for the upcoming summer season," said Deputy-Mayor Andrew Turner in June, meaning that Akaroa residents will not have long to wait to see the results of the proposed change. 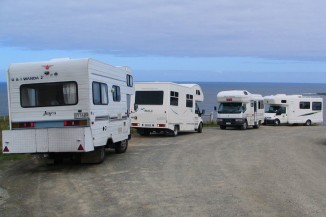