It has been eight years since the first Canterbury quake struck, but home-owners are still battling insurance companies and the Earthquake Commission (EQC) over unresolved claims.

On Saturday, more than 60 people protested on Papanui Road, voicing their frustrations with dodgy repairs, High Court cases and a lack of action.

Protest organiser Shona Strachan said residents were fed up with their individual battles.

"I have an unsettled insurance claim and I feel eight years later I shouldn’t be in this position... I also know, professionally and personally, there are a lot of people suffering: emotionally, financially and their health is suffering because of this massive battle."

Strachan said the protesters were united to battle.

"We're there to support each other, and share our knowledge and skills. We’re angry, but we try to put a positive face on it because if we don’t we will just be swamped by the fight. It’s just too big."

Tuesday marks eight years since a magnitude 7.1 earthquake struck the region. However, it was the quake on February 22, 2011, which killed 185 people and sparked years of aftershocks.

Protester Mike Dodge, whose home has had no repairs since the quakes, said the insurance companies were just "playing games".

"We’re all at the mercy of insurers. What we pay in insurance should be honoured."

"Insurance companies, dealing with 30-plus people, learn the game - so we have to fight back and join together and say we can play the game back."

Protesters Janice and her daughter Claudine Methven said they were fed up with the "games and lies".

The next option for them was to file a case in the High Court because their insurer would not repair Janice’s three-story home in Southshore.

"I’m not getting any younger and I can’t move, I can’t go any further forward. I lost my husband three years ago and I’m stuck, absolutely stuck. It’s crazy," Janice Methven said.

Like the Methvens, Mike Dodge wanted the Government to move quickly, setting up a tribunal to deal with some of the 3448 outstanding EQC claims and 2046 private insurer claims.

"I really want the Government to get this tribunal going, so I can pull out of this silly High Court process which is really expensive and long," he said.

A bill to establish the tribunal is before Parliament, but onsold claimants, those who have bought homes in need of further repairs, will be shut out from the tribunal.

Jamie Gibling, another protester, said he bought his first home for his young family in New Brighton three years ago, believing all the repairs were up to standard.

The property needed $300,000 worth of re-repair work but no one was liable, he said.

Seamus O’Cromtha, who is secretary of Empowered Christchurch, an organisation working for fair settlements, spoke at the protests.

He questioned when the battle would end.

He said a rise in suicides in Canterbury could be a reflection of the "misery and despair" people had been put through through from insurers and EQC. 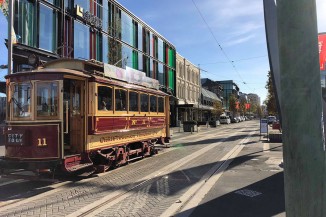 'Is Christchurch turning into London?' 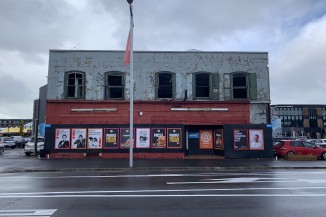 Dirty 30 down to final six

Only six buildings remain on the council's barrier site list which started off with 30 quake damaged buildings.