Hornby residents have vowed to "lie in front of the diggers" to stop city council plans to build a new $35 million service centre at Denton Park.

The Christchurch City Council voted last month to build a pool, library and service centre at the park, which was home to Hornby Rugby Football Club and the Hornby Cricket Club.

Residents said the park was used daily by locals for walking, biking, and family outings. They believed nearby Kyle Park was a better choice for the new facility.

Hornby Cricket Club committee member, Kevin Hornbrook, said the club would have to shut down if the plan went ahead.

"A 55 year-old sports club closed down, because the council want to put a swimming pool in."

Hornbrook said the council’s response to residents’ concerns was pathetic.

He said some local politicians had indicated they would oppose the park revamp before last year's council elections.

He believed they had broken their word.

"Two or three of them voted for it… they turned their backs on the people that voted them in."

Hornbrook felt the "ignorant and arrogant" move was made too quickly, and residents were left out of the loop.

"I feel that the whole situation right from day one has all been very poor."

He said residents had voiced their disgust at the council's decision on social media and would "lie in front of the diggers" before allowing the centre to go ahead.

Hornby Ward councillor Jimmy Chen was one of six community board members who chose Denton Park as the preferred option.

"The council adopted the Community Board recommendation which is based on staff information, as well as the submissions during the consultation period."

Chen believed the decision reflected the view of the wider community.

"One couple who lived in the area for 45 years have said Hornby needs this facility in Denton Park because it would be easy to access."

Other options for the location of the library, suggested by the rugby and cricket clubs, were ruled out by the council.

"Warren Park is too far away, and the consultation showed that people don’t want it to be there," Chen explained.

He said cleaning up Kyle Park for the new library would cost up to $12 million as it had land issues and asbestos problems.

"This is un-budgeted on the long-term plan. The mayor and councilors won’t be supportive of this because it’s not cost effective."

He said spending less than $12 million dollars would mean the size of the facility would have to be reduced.

"In this kind of case, it’s unfair to the wider Hornby area and the residents."

Chen admitted some people would feel let down whichever way the decision went, but said the council had offered to relocate the affected rugby and cricket clubs.

However, this offer was rejected by the cricket club, who said it was not realistic.

Chen said the council and the clubs need to work together to get the best result.

The council planned to start building the new centre in mid-2018, but the cricket club vowed to keep fighting it. 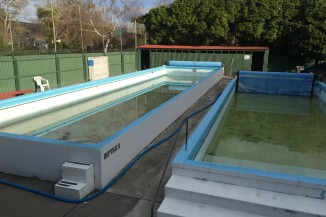 After decades of meetings and reviews the Christchurch City Council has finally decided to fund a community pool in Linwood.