After three hours of delegation, the Waimāero/Fendalton-Waimairi-Harewood Community Board has approved granting a lease to Old Boys Collegians Cricket Club (OBC) to build replacement cricket practice nets at Elmwood Park.

The community board heard from many speakers who voiced their support and concern for the new proposal.

A common theme of support were that the nets would be an asset for cricket, the park and for the wider community, as well as improve the park for all users.

A report prepared by the Christchurch City Council said the existing nets were unsafe and no longer fit for purpose.

Of the 400 public submissions, 361 supported the proposal. Nearby school St Andrew's College and the Christchurch Metro Cricket Association threw their support behind it.

OBC Committee member Steve Wakefield said the improvement to the cricket nets would be "a community asset, not just for the cricket club".

Life member, coach and committee member, Mandie Godliman, voiced her support for the new nets as it was a matter of safety. "The nets are no longer adequate... I have personally seen many injuries," she said.

She referenced one incident where a woman walking in the park had been "knocked unconscious", when she was hit in the head with a cricket ball.

Metro Cricket general manager Mike Harvey spoke of his organisation's support and endorsed the proposal for the nets at Elmwood Park.

Some of the 39 people, who submitted opposition to the new cricket nets, were concerned the cricket club was dominating the park. One said the "scale of the structure would have a detrimental effect on the park's amenity and heritage value, and on the ability of others to use and enjoy the space".

Another complaint was a perceived lack of communication and consideration from the council and the cricket club.

Local resident Gordon Stamper argued the park was "not fit to accommodate this proposal", and would negatively affect local residents who walk through the park.

Stamper said he had sought "preliminary legal advice". He believed the council "may not of have complied with its obligations under the Reserves Act and the Resource Management Act".

Heaton St resident Frank Pipe said the proposed new nets were "not about safety. It's about greed".

He agreed with Stamper's view on the council process and the "lack of disclosure". He described a public meeting about the proposal as having an "atmosphere of intimidation and outright bullying".

City councillor and community board member James Gough accepted the ongoing discussion of improvements to the cricket nets needed to be addressed.

"I accept that putting this on the back burner isn't going to suit anyone," he said.

Last year, OBC gained approval from the board to lease the cricket pavilion, but not to build new cricket nets. 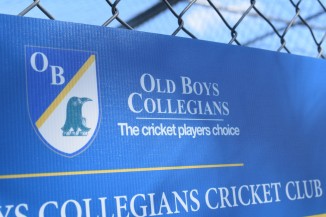