Tilaia will go overseas on a diplomacy posting in 2020 after winning the Prime Minister's Pacific Youth Award for Leadership and Inspiration.

Ministry for Pacific Peoples outline for the Leadership and Inspiration award is to recognise a young person aged 17-24 years old who has demonstrated outstanding leadership qualities by leading a project in their community, church or school or has acted in a way that has inspired others to make a positive change in their own life or the lives of others.

Tilaia was heavily involved in the community and played a significant role in the Students Uniting In Love vigil at Hagley Park following March 15.

Tilaia was really shocked to find out he won and when he got the news he couldn't believe it.

He is yet to know where he will go, and said, "Wherever it is, I know I'm going to have such a such a great experience and am going to learn so much."

Those experiences he hopes to bring back to New Zealand to further help his community as well as the country.

Former winner, Leorida Peters, was also in high school when she won the award and went to New York to see New Zealand on the United Nations Security Council.

"It's still one of the coolest moments in my life today," Peters said.

Peters said it set her up with lots of good connections, she learnt a lot while travelling and had career options.

She has since established an initiative, the Mafaufau Project, to engage pacific communities with mental health.

The ministry has been a big help with that, Peters said, "It's really nice that they still keep you in their sight even when you leave."

Peters is currently studying law and politics at the University of Auckland. When she graduates she plans to work in the policy sector helping make more minority voices heard. 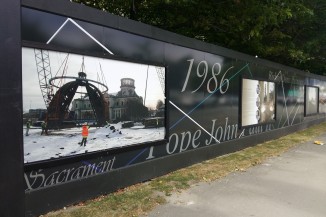 Travel through time at cathedral

The Cathedral of Blessed Sacrament is now allowing visitors to travel back in time, with only their phones.