Kiwi producer Matt Noonan, who recently wrapped production on The Royal Treatment - filmed in Oamaru and Dunedin - and producer Donald De Line are the team leading the shoot.

ScreenCanterburyNZ Manager Bree Loverich said it was the accessibility of locations in Christchurch that were attractive to international productions.

"We’re committed to securing a larger share of the $3.5 billion screen industry in New Zealand, and this project is definitely a step in the right direction."

It would involve the closure of a section of both the Northern and Southern motorways at different times, with the newly-completed roads being a key reason Christchurch was chosen as a filming location.

Waka Kotahi NZ Transport Agency’s Ian Duncan confirmed the motorway closure for short periods and said "we have identified timeslots that we think will reduce inconvenience to motorway users and fit with the film schedule".

He said impacts on travel time would be small, confined to weekends and involve short detours, the intention being to minimise closures as much as possible.

In a statement, ChristchurchNZ said "Christchurch and Canterbury are in a perfect position to provide capacity for the national industry to grow and meet unprecedented global demand for content".

New Zealand is experiencing significant interest from major international studios as a filming destination, particularly following Covid-19, as it is one of the few countries that isn't under strict filming protocols due to the pandemic.

Upcoming Netflix series Sweet Tooth recently wrapped production in the country, James Cameron's Avatar sequels continue to shoot and production has re-commenced on Amazon's mysterious Lord of the Rings series - currently one of the most expensive television series ever made. 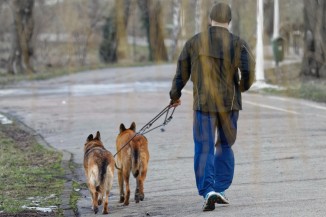 Dogs for good cause in Christchurch

Large dog walks are becoming more common in our cities, raising money for charity and bringing people together.