The Christchurch City Council spends $700,000 a year to clean up graffiti.

The graffiti clean-up is concentrated in the central city, where the number of reported graffiti is on the rise. June had about 600 reports compared to May, which had 400 reports.

Moorhouse Ave, Armagh St and Montreal St are the hot spots. The three most reported tags are 'Detor', 'Gomz', and 'Plotz', with over 700 of the reports on contract building sites and utility boxes.

Linwood-Central-Heathcote Community Board chairperson Alexandra Davids said the many empty walls around the central city were inviting for graffiti artists.

She believed commissioning more murals around the city would result in less graffiti, as it created less space for taggers.

Street Artist Jabob Root, 20, has been creating murals around Christchurch for three years.

He uses his art as his storyteller, with a lot of inner meaning to displays emotion, feeling or issues.

Root said a lot of the time graffiti was done by artists and not often taggers.

"As long as the graffiti taggers don't go over murals, they're fine," he said.

"Art spruces up the city and can turn a blank boring wall into something amazing", Root said.

He agreed with Davids that the city council could commission more artists.

A city council spokesperson said having artwork around the central city may act as a deterrent for unwanted graffiti, but "if we put too much artwork everywhere in the CBD it may lose its effectiveness as a graffiti deterrent." 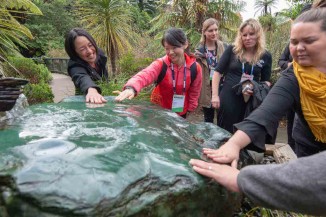 Tourism in need of a government with a vision

The election is approaching and the new Government in power must have the vision to revitalise the tourism industry.

Canterbury and most of New Zealand have moving into Level 2 and the tourism industry is unsure what will happen to the sector.