Urban forestry is quickly becoming a unique safe haven for native birds and other wildlife around Christchurch.

Dr Antony Shadbolt, a landscape architect and ecologist spoke to the Canterbury Horticultural Society about the return of native birds since teams had begun planting native trees around the city, replacing those that had been destroyed many years ago.

He explained that, back in the 1800's when Europeans first arrived in Christchurch, they felled large areas of bush until very little remained.

Dr Shadbolt said that this is part of a wider Christchurch initiative that allows native birds to migrate from different forest areas throughout the area.

The idea is that there will be large pockets of native bush spread out around the city with smaller pockets in between to serve as stop off's for bird life. This, Dr Shadbolt said, will help the bird population thrive.

"In our grandchildren's lifetime, we might see Kaka, Kakariki...some really cool species coming back to the city," he said.

Other birds that will benefit are Kereru, Fantails, Bellbirds, Tui and even Tomtits and Robin.

Also part of this initiative is a naturalizing of the waterways. This is a move that replaces old pipe lines and waterways that were designed to simply get rid of water from land areas and into the ocean and actually create homes for native waterfowl.

Teams have been planting trees and native shrubs along waterway banks and allowing the grasses to grow a little longer, imitating a natural home.

Already, native waterfowl such as the white heron are becoming regulars in these water ways. There are plans to continue this around the Avon River and other areas.

All of this moves to make Christchurch a hub of biodiversity and improve the city for generations to come.

"If we plant a Totara tomorrow, it'll still be there in a thousand years time." 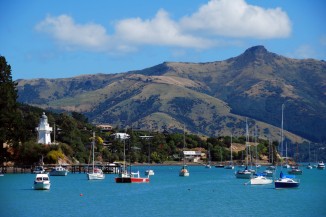