His goal was to kill the stigma surrounding suicide and start conversations about mental health.

Reed planned the Let's Chalk About Mental Health event to coincide with Suicide Awareness Month, which began on September 1.

Messages such as 'you are enough,' 'be strong,' and 'you are a big part in someones' life' covered the concrete blocks of the square, along with pictures of sunshine and love hearts.

Reed said 500 bags of chalk had been donated and about 250 people attended the event covering 90 percent of the square.

The idea for the event came from a school in England, which did a similar project.

Reed is the founder of the 'Suicide Awareness and Prevention' Facebook page, and ran the event voluntarily due to his personal connection to mental health.

In 2012, Reed made a serious attempt to take his own life, after battling with depression. From these dark times he saw gaps in the health system between people needing help, and accessing help.

He believed the event was relevant right now and said the latest suicide statistics showed an increase in people taking their own lives.

The RAD Collective, a team of artists in Christchurch, were also invited to do a three-by-three metre centre-piece in the square. Kophie Hulsbosch, an artist from The RAD Collective, explained they wrote: 'Your words are your weapons and your thoughts are your ammunition' as their art-work, after being inspired by a lady named Aroha who spoke about her life in a wheelchair.

The Suicide Awarness and Prevention Team plan to make the chalking event an annual event, on September 1st every year. At the beginning of next year they are also planning to hold a fundraising concert and a solution-based bullying forum on Pink Shirt Day.

Another idea they have is to hold a similar chalking event where people are invited to write about struggles they are having in their lives. Then the New Zealand Fire Service will wash the chalk problems away with their fire hoses.

This event will be like other therapeutic events where people write on the beach and the ocean washes it away. 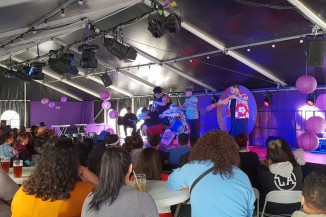 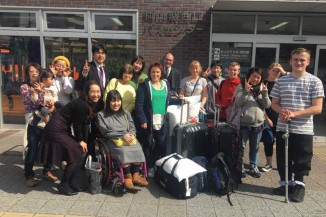 Teens with disabilities jet to Japan

Jack Harwood and Liam Ryan have just returned from a whirlwind trip to Japan on a youth and disability exchange.