Caleb Cutmore dominated his division at the Duke Festival of Surfing.

The Hamilton Boys' High School student won all of his heats over Friday and Saturday to get a spot in the final on Sunday.

As well as winning the GMK Builders under-17s, Cutmore placed fourth in the Exit Surf under-20 division.

Top-ranked Canterbury surfer Harrison Whiteside, 20, was knocked out in the semi-finals.

Astonishingly, 13-year-old Myka Black took first in the under-20 division.

"It's the first time Myka’s beaten me," Cutmore said.

Despite small waves on Friday, Caleb said they picked up throughout the weekend.

"Sunday's waves were bigger but they were messy which made it harder for bigger guys to get up."

The Ray White Duke Festival hosted more 150 surfers from around the country, with 20 different divisions.

In early March, Cutmore won the Under 17 Division at the Rip Curl GromSearch in New Plymouth’s Fitzroy Beach.

His win landed him a spot to compete against an elite group of young surfers at the International Rip Curl GromSearch final in an undisclosed location sometime this May.

In January, Cutmore also won his final in the under-16 boys' division in the National Surfing Championships.

He finished with a score of 15.7, five points ahead of the runner up held at Auckland's West coast Piha Beach.

Cutmore said he loves watching Californian based professional surfer Dane Reynolds because of his "gracious approach in the waves but ability to carry power in his technique."

While still being a high school student, Cutmore tries to surf at least three times during the week and both on Saturdays and Sundays out in Raglan.

Along with his Rip Curl GromSearch trip, he intended to travel to America and Australia this year to compete.

Cutmore said he looks forward to hopefully coming back to surf in Christchurch soon.

All Black great returns to Canterbury 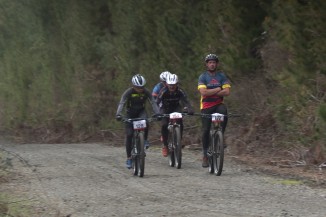 Cantabrians young and old battle it out for top spot at the Canterbury MTB Series.