Kiwis are being urged to keep themselves in honey by doing more this month to protect bees from pesticides.

September is Bee Aware Month and Kiwis are being urged by Apiculture New Zealand and crop manufacturer group Agcarm to do more to protect the species.

Although the number of hives in New Zealand is growing, pesticides and changing environments are a constant threat, says Apiculture New Zealand chief executive Karin Kos.

There were 811,357 registered hives in June this year.

"I think as an industry we're aware that bee health is really critical, and we've got to look after them.

"NZ beehive loss is low to average compared to other countries, but that's not to say we should be complacent," Kos said.

He said in addition to infesting hives, the parasite was growing resistant to beekeeper chemicals and this was having a damaging effect on the bees.

"There's lots of evidence to say that, over a course of five to 10 years, the amount of pesticides that build up in a brood chamber for bees is really high," he said.

"Over time, that can cause death."

Celebrated entomologist Barry Donovan said the number of registered hives dropped after the introduction of Varroa Mites to New Zealand.

He said hive numbers had climbed since, driven by the high price of Manuka honey.

Webb said the species was vital to biodiversity as they contributed to the pollination of a third of food crops.

"Without them we'd lose a massive portion of what we have in our fridge."

They wanted to educate the public about ideal honey bee habitats and the proper use of pesticides.

Sixteen local councils have joined the Bee Friendly Garden Challenge as part of the campaign.

Donovan said there were 32 other types of bees in New Zealand other than the honey bee.

"The public at large needs to be aware that they should obey the instructions on pesticide labels in order to conserve these very valuable pollinators." 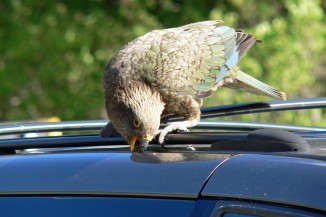 Keas are smarter than we thought

Willowbank Reserve wildlife experts are impressed by the results of intelligence tests conducted on Keas.

What's next for the red zone?

About 600 hectares of land stands empty after the earthquakes and now ideas are being put forward on what to do with it next.