He ran for Mayor twice without ever wanting the position. He's listed as one of New Zealand's top 100 history makers. Take a look into the life of John Minto, one of our most influential activists.

He's a busy man, John Minto, but kind and generous with his time. So much so, he took time for me. Here's his story.

He was on a National tour to commemorate the 40th anniversary of the 1981 Springbok tour when we caught up. Over the phone, we spoke about his life, career in activism, politics and education.

Minto was born in Dunedin. The second child in a big Catholic family. He learned to value social justice at a young age.

His start in activism came in 1975. It was through Halt All Racist Tours, known as HART. HART was opposed to letting the Springboks rugby team tour New Zealand due to South Africa's racist policy of Apartheid. Minto became the national organiser of HART in 1980.

Despite the opposition, Prime Minister Robert Muldoon invited the Springboks to tour in 1981, and it led to fierce protests which divided the nation. Minto says Muldoon’s decision was an example of cynical politics, as he knew the tour would go down well with key battleground political seats. The police employed violent tactics to control protesters. Minto was in the thick of it.

Over the course of the few months that the team toured, Minto says the police turned from an ordinary force into a paramilitary one, equipped with riot gear and batons which were nicknamed ‘Minto bars’.

“If people are breaking the law and stopping the games, you deserve to get arrested, but you don’t deserve to get your head bashed in, and that happened too often”, Minto says.

He agreed with an assessment made by a policeman that it was “sheer luck” no one was killed during the protests. Minto says people were getting angrier and more frustrated by the day. He thinks if the tour had gone on another week people could have been killed.

One of the key moments of the protests was the cancellation of a game in Hamilton, when activists flooded the field. They’d scoped out the area weeks before and planned the best way to get in. Minto doesn’t think the police believed the protestors would even try to get onto the pitch, but they did, and the effects were felt all around the world.

Nelson Mandela was in prison in South Africa at the time. When he heard the game in Hamilton was cancelled, he said it was like the sun had come out.

Looking back, Minto says this was one of the proudest moments of his career in activism.

“I thought, wow, we struck a significant blow against Apartheid that day.”

The protests also helped to bring light to New Zealand’s own problems with racism. Minto says it brought about a period of soul searching for Pākehā people, reflecting on New Zealand’s racist and colonial past. He says one of the outcomes was a change to the Waitangi tribunal under David Lange’s government in 1985. The tribunal was given the power to look at historical Treaty breaches, not just present-day ones.

Minto got the chance to meet Nelson Mandela years after the tour when the South African president visited Aotearoa as part of a heads of Commonwealth meeting. Minto was wowed by Mandela's presence, saying 'he had Charisma with a capital C'.

When Mandela died in 2013, Minto says there was outcry that no one from the anti-Apartheid movement in New Zealand was invited to the funeral. Then Prime Minister John Key had a number of invites to give out, but they were given to politicians, over activists.

Minto has been outspoken about his disdain for the current ANC government in South Africa, which has been in power since 1992, saying their policies only serve a small elite black population. In 2009, he denied an award nomination from the government for his involvement in the protests - but they said they never nominated him.

Outside of activism, Minto was also a teacher, and education was always very important to him and his family. He taught mostly in low-income areas. He believes that’s where you can make the biggest difference. He sees teaching as a way to help improve peoples' lot in life.

These days, Minto is retired. H says he’s too busy to work, but still has a hand in activism as the head of the Palestine Solidarity Network Aotearoa. The group protests oppression of the Palestinian people by the Israeli government. He also spends his time learning te reo Māori.

Minto says the Palestine issue has taken a long time to come into mainstream knowledge because the Israeli government has always said that the situation is complicated, and you can’t understand it unless you go there. He says the South African government used similar tactics when talking about Apartheid in the 80s.

He thinks 2021 is the turning point for the Palestinian struggle, as the West becomes more aware of the oppression going on there.

“It is an apartheid state, it is a racist state - absolutely racist to the core, we’re now seeing that in a better perspective”

Minto had a couple of goes at running for Mayor, in Christchurch and Auckland. Curiously, he never actually wanted the position. Instead, he wanted to bring big ideas to the political table. He’s happy to have got some of his policies out there, pointing to a proposed trial of free public transport in Christchurch as an example.

He believes in the future of activism in New Zealand and has been impressed by young people’s action on climate change. He thinks the younger generation have the same fighting spirit that protesters had back in the 80s but will be more focused on local issues rather than international ones.

Minto says with hindsight he can look back and think about what he could have done differently, but has no regrets, and he’s proud to have been a part of so many important causes in his lifetime. 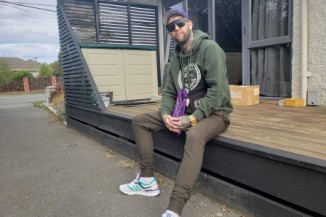